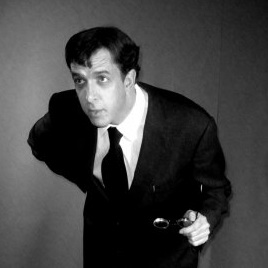 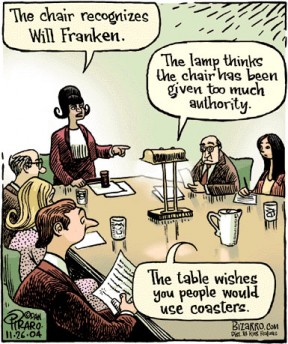 “Imagine a surreal-estate agent guiding you through some Escher-like architectural marvel, where each room is its own deeply funny, satirical dream, every passageway a verbal wormhole, and in the corner a shaggy high priest of nothing's-sacredness is fiddling with a bunch of knobs on what looks like an espresso maker. Suddenly you wake up and remember that the lanky comedic heavy-lifter who put the abs on absurdity with last year's Good Luck with It returns to the Marsh for a one-off.... The moral? Existence may be fleeting, but Franken is not to be missed.”

"What elevates Mr. Franken above your garden-variety comedian is an erudite wit and a highly developed sense of the absurd "

"San Francisco has nurtured many of comedy's biggest names, and this guy is destined to be one of them. "

"Franken wanders through a parallel-universe city populated by hipsters who challenge John Milton to poetry slams and crass marketers of women's empowerment symposia, among other fun-house imaginings. "

"In a mere hour and 30 minutes, Franken manages to inject more thought, soul, and hilarity into such varied topics as the parents of murdered children or President Bush's campaign to capture the 18th century (yes, you read that right) than any other show I've seen. The best part is he pulls no punches. He refuses to dumb down or censor his material, and he virtually obliterates any distinction between the high-brow and low-brow. . . . Aside from effortlessly mixing high culture (references to Edna St. Vincent Millay, John Milton, deconstructing television ads) with low (the most scatological ad for a woman's empowerment symposium ever), Franken also manages to find a marvelous balance in his performance between precision and spontaneity. . . . It's probably the funniest thing I've seen all year. "

"To call Will Franken's performances "comedy"is limiting. His shapeshifting multipersona performances bring to mind the Salvador Dal’ quote "I don't take drugs; I am drugs. "When Franken embodies one character after another - accent, mannerisms, and all - the effect is of an overdriven multimedia device. He deconstructs all manner of assumptions; just as The Onion parodies journalism, Franken satirizes performance's tropes. His material may offend some, but he even deconstructs the feeling of being offended and posits it as ex post facto reaction rather than innate response. Franken is a prolific writer whose never-ending stream of new material and depth of reference shows up the laziness of other performers who spend their time polishing the delivery of the same tired routines. While LSD may not be legal, so far Franken is. "

"He's a riot: Will Franken's one-man sketch show may make you laugh till it hurts. . .Franken does a one-man sketch troupe routine, taking everyday contradictions to their logical conclusions and tossing off references to Romantic poets. Quite simply, he does the smartest comedy I've ever seen. I laughed so hard when I discovered his act that my ribs couldn't contain it all. "

"Imagine a surreal-estate agent guiding you through some Escher-like architectural marvel, where each room is its own deeply funny, satirical dream, every passageway a verbal wormhole, and in the corner a shaggy high priest of nothing's-sacredness is fiddling with a bunch of knobs on what looks like an espresso maker. Suddenly you wake up and remember that the lanky comedic heavy-lifter who put the abs on absurdity with last year's Good Luck with It returns to the Marsh for a one-off. . . . The moral? Existence may be fleeting, but Franken is not to be missed. "

"With respect to one-man comedy shows, there's funny, and then there's Franken-funny. A monster comic showman of truly prodigious talent, San Francisco comedian Will Franken fills up a performance space so naturally you'd think he could really only live on stage (without, anyway, seriously alarming the villagers). In this largely brilliant series of absurd segues and satirical sketches (the show's title emerges from a particularly pettish personality type in one of them), the lanky, long-haired, and distinctly not-what-you'd-expect performer lights on the Marsh like a gangling bird of prey, devouring every cultural cliche, vacuous dramatic trope, or everyday inanity a deeply middling civilization has to offer. The easily offended will not be disappointed. Devoutly sacrilegious and scrupulously inappropriate, as well as refreshingly off-the-wall, Franken's the surreal thing. "

"The stage version of Good Luck With It is a nearly flawless one-man show, with the frantic Franken breathlessly running through skits that hammer liberals, yuppies, and anyone puffed up with importance. "

"The fuel of "Good Luck With It" is the disgust of an intellectual raised in a religious small town, combined with the dismay of a religious, small-towner living in a metropolitan Babylon. It's more acting than stand-up, and no race, minority, nor pet cause is safe. It belongs in some London theater and it's way too good for cable TV. "

"Known for his highly dramatic, theater-of-the-absurd comedic routines—more akin to Monty Python than to anything you'll seen on Leno. . . . Every Will Franken show is like watching a cast of thousands, with a potpourri of voices and characters. "

"He's got Monty Python's bent toward satirical social commentary, but Will Franken isn't as warm and fuzzy as the famous British comedy group. He's got a mean streak: He'll make just as much fun of a Native American poet as he will the president. And while audiences sometimes bristle at such stuff, they keep coming back, because Franken is stone cold funny. "

"If any comedian today could be said to embody the spirit of San Francisco, it's Will Franken. . . . Franken slaps his audiences about the face and neck with his cerebral, surreal blend of sketch comedy mixed with stand-up. Unlike most professional funnypeople, who specialize in one kind of humor or another — political, gay, Jewish, whatever — Franken makes it impossible to know what you're going to get at his shows. "

"Will makes me laugh as hard as Dubya makes me wretch, shudder and vomit. And that is saying something. "

"Somewhere in the nether regions between stand-up and sketch comedy (a place so fearsome and shadowy some refuse to believe it even exists) reigns a sovereign of indeterminate mental health. His name is Will Franken. . . "

"Franken is much more an actor and performer than a comedian, and when he does spot-on impersonations of a folksy open mic host, or an anti-drug lecturer, he steps inside unique, authentic personas. Instead of delivering one-liners, Franken simply becomes these diverse characters, something that a generic stand-up comic would be hard-pressed to replicate "

"From Stephen Hawking singing 'Anarchy in the U.K.' to Monty Python-esque gender confusion, Franken's characters openly defy 'let me tell you about me and my weird life' stand-up comedy. [Circus Head] incorporates video and music, and results in such wacked-out scenes as 'the gay cowboy actor,' a terrifying 'Introduction to Shakespeare,' and (brace yourself now) a skit called 'The STD Quilt.' "

" While stand-up is the medium in which most would classify him, Will is quickly inventing a new genre for himself of absurdist monologues that take the audience on a journey through the strange recesses of his mind "

"Franken's timing is sharp, and his uncanny voice impressions range from a stuffy Oxford professor to a shambling blues guitarist, with a detour through Kermit the Frog "

— The Reno News and Review

Grandpa, It's Not Fitting Reviews

"The lanky, long-haired comedian's genius resides in his sense of the absurd and a disdain for political correctness on either side of the left/right divide. . .He is devastating as he skewers smug San Francisco liberals' politically-correct bigotry, playing an activist urging his cohorts to make sure that Christians gathering in Golden Gate Park get the message, 'This is a tolerant city. Get out!'...

"One of his more tasteless sketches is also one of the most purely—if uncomfortably—hilarious, as he plays a member of Artists Against Rape who performs an interpretive dance of a man less concerned with the crime happening outside his window than with what he fears will be a harsh police response. . . "

"'Grandpa, It's Not Fitting' is a mixed bag, but it is not just the successful bits that make it worthwhile. Even when Franken's wit falters, his ideas are compelling, and the door the show opens into the mind of a man who can make a connection between the sun and a children's food fight or an American Indian tribe and philosopher Jacques Derrida is fascinating. "

"Things are so mystifying in the opening segments of Will Franken's new solo show at the Marsh, 'Grandpa, It's Not Fitting,' it took me awhile to connect with the lanky, wild-eyed writer/performer. What are we to make of a recorded song about ejaculating into a swan, and a meandering, extended sequence in which an amplified voice-over intones repetitive stage directions as Franken, in a lab coat, gazes quizzically at the tech booth and telephones a terminal breast cancer patient, represented by a gnatlike buzzing in his ear? But when Franken moves on to a series of satirical scenes that morph seamlessly into one another, 'Grandpa's' 90-plus minutes race by, full of wit and weirdness. . .

"Franken is fearlessly un-PC willing to mock things we're not supposed to laugh at. "

"Comedic powerhouse Will Franken unleashes his latest one-man assault on the conventional, the crass, and the mind-numbingly mundane. Fighting the absurd with the absurd, Franken, under the sure hand of director David Hines, masterfully translates a quick and wildly roaming mind to a more or less smooth blend of savory set-ups and elaborately sarcastic sing-a-longs whose impertinent surrealist humor tastes of Ween as much as Monty Python. . . "

"Seeing this city through Franken's kaleidoscope eyes is one of the things that has kept me sane over the past few years. San Francisco and Franken are a good fit for one another. Just as it's impossible to imagine Jerry Seinfeld or Woody Allen associating themselves with any metropolis other than New York, it's hard to imagine Franken feeling at home beyond the Bay Area. . .In this city of misfits, Franken fits right in. He's San Francisco's patron saint of misrule. "

"Lest Franken be labeled a conservative or, what's worse in today's parlance, a dreaded neoconservative, there's something in his show to offend just about anyone. Franken is that rare species—an independent thinker with a healthy sense of the absurd and a complete and utter lack of political correctness. Not to mention being funny. "

"Franken is trying to break through the thick shellac of PC that our society has gleefully painted around itself. The point becomes clear as the show progresses. Most of his sketches are discomforting, some bringing out irritation and even anger in the audience. . .as the evening went on, I gradually came to understand what Franken was doing. Slowly, methodically, he deconstructs the PC mindset and shows it for the corrosion of thought it really is. . .it's a message that needs to be heard. Highly recommended. You'll be entertained, likely pissed off. And if you're lucky, you'll leave with your own layer of PC shellac a bit thinner. "

Here's one in Swedish (pretty sure it's Swedish. . .I ran it through a translator thing): Forsta skalvet by Thomas Listerman